Why are sanctions against Belarus not more effective? | World | Breaking news and perspectives from around the world | DW

Dictators like to win elections. In the past 27 years, Alexander Lukashenko has stood for election six times and has been victorious every time. Or supposedly victorious, that is, widely viewed as rigged elections. Sanctions have been imposed on him for much of his reign and stricter penalties are expected to come into effect in the coming days.

Christian von Soest from the Hamburg German Institute for Global and Regional Studies (GIGA), however, does not expect tougher sanctions that simply bring 66-year-old Lukashenko to his knees. “This attitude overwhelms this complicated instrument with far too high expectations,” he said.

Long history of sanctions against Minsk

DW’s analysis of the Belarusian case shows what a difficult instrument sanctions are. In 1994, when Lukashenko was elected for the first time, the timid opening of the former Soviet republic came to an end. Belarus began to turn into an autocracy.

Political opponents disappeared without a trace; the media and civil society were harassed; Citizen protest was suppressed. The United States and the European Union, the world’s most active sanctioners, responded with restrictive measures against the Lukashenko regime. They have been in force almost continuously since the early 2000s.

In 2004, the United States passed the Belarusian Democracy Law, a federal law that is still in force today. It enables civil society to be promoted and the ruling elite to be punished. In 2006, incumbent US President George W. Bush published one supreme command that froze all US assets and accounts of Lukashenko and his close associates. In the same year, after European accounts and assets were also frozen, the EU banned Lukashenko and some of his allies from entering the country. An arms embargo was then imposed in 2011.

Diplomatic thaw amid the annexation of Crimea

However, when Russia annexed the Ukrainian peninsula of Crimea in 2014 and supported separatists in the east of the country, the European Union once again got involved with Lukashenko out of its own security interests. The Belarusian capital, Minsk, has become an important center of diplomatic efforts to resolve the crisis. In 2016, the EU lifted its sanctions against Belarus: only the arms embargo remained in force.

This period of relaxation came to an end in August 2020 with what was known as a manipulated presidential election by the opposition and the violent suppression of peaceful mass protests. In three stages, again the European Union Entry bans imposed and accounts and foreign assets frozen. A total of 88 individuals and seven companies are currently blacklisted. Dozens more will be added soon.

Lukashenko has not been allowed to enter the EU since then November 6, 2020. However, on May 23 this year, his regime forced a Ryanair plane to land in Minsk to arrest the exiled Belarusian journalist and blogger Raman Pratasevich, who was on board. Since then, European airspace has been closed to aircraft from Belarus – a measure that affects all Belarusians.

Further economic sanctions could be imposed on important Belarusian industries such as fertilizer production by the end of June. The US has also announced much tougher punitive measures.

However, any tightening of the sanctions is “a very double-edged sword,” said Soest’s sanctions researcher. “If more economic sanctions are imposed, it will affect the population too,” he said.

This is exactly what happened in Iraq in the 1990s when the UN Security Council imposed an economic embargo. The dictator Saddam Hussein stayed in power until 2003, when millions of Iraqis suffered from poverty, hunger and epidemics such as typhus and cholera.

As a result, the international community recognized that sanctions should only affect policy makers or specific sectors of a country’s economy.

The most common targeted sanctions today include entry bans and the freezing of accounts and assets abroad, as in the case of the Lukashenko regime. Comprehensive, less targeted economic and financial sanctions that affect entire economies, such as exclusion from the international SWIFT payment system, are excluded. A SWIFT exclusion for Belarus is also being discussed. 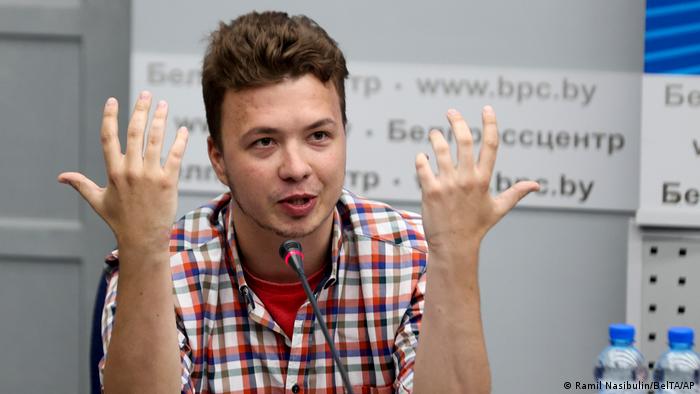 Pratasevich became a political prisoner when his Ryanair flight from Athens to Vilnius in Minsk. had to land

Not all sanctions are created equal

A DW data analysis of global sanctions since 1995 shows that 36% of travel bans were successful, meaning that in a third of the cases the sanctioned state made some concessions to the sanctioning party.

In the same period, targeted and untargeted financial sanctions were successful in 41% of the cases.

Broader sanctions were even more successful. This was particularly true for the lifting or suspension of military cooperation (46%).

The highest success rate – 55% – was achieved with relatively infrequent sanctions such as flight bans, closing sea ports, breaking off diplomatic relations or being excluded from international organizations. These are included in the graphic under “Other”. 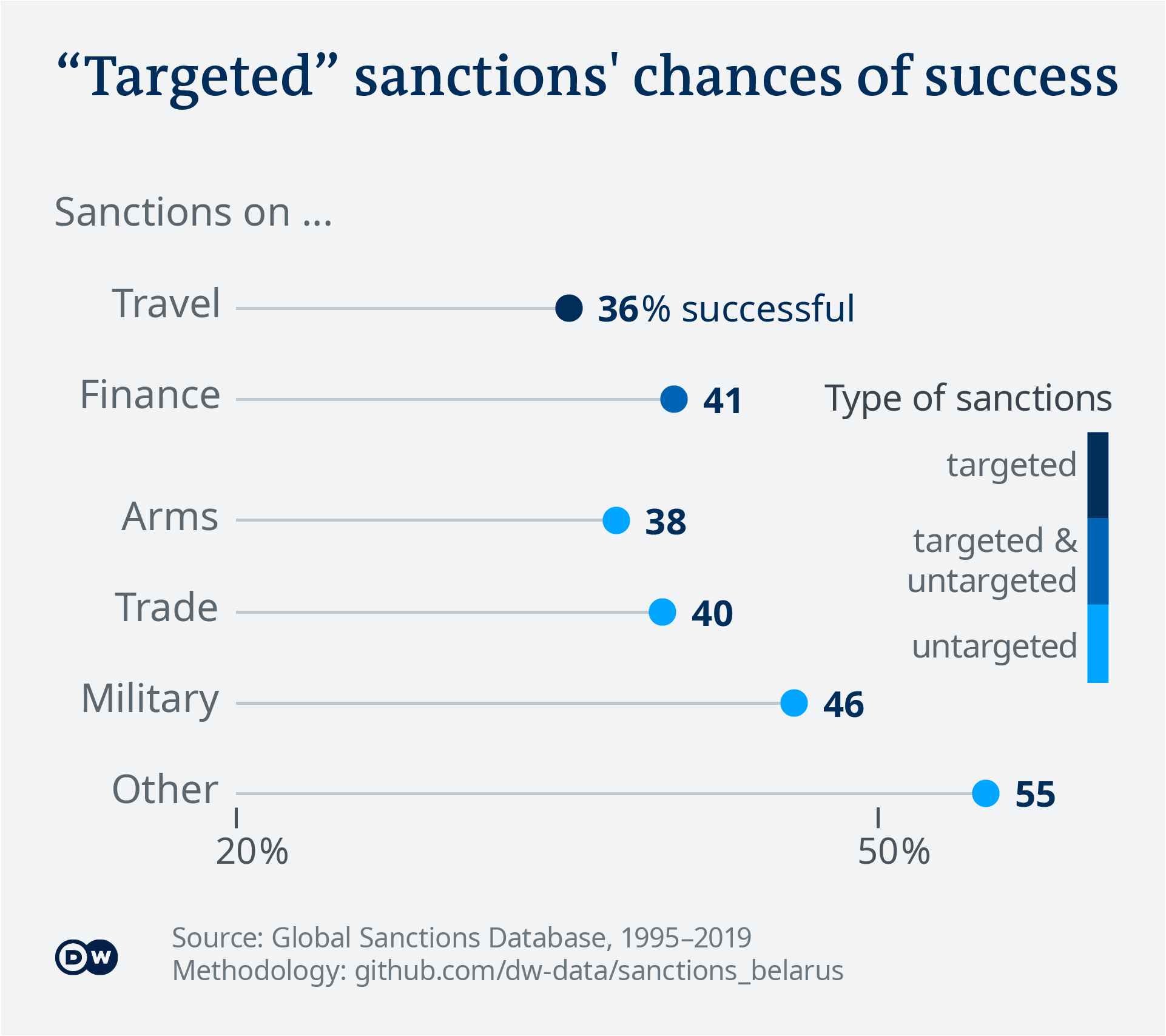 These chances of success are based on a DW analysis of the Global sanctions database. The database is a joint project of the Kiel Institute for the World Economy, the University of Konstanz and Drexel University in Philadelphia. The research team documented more than 1,100 sanctions and look at your result, based on media reports.

Exemplary sanctions against the apartheid regime

A specific change in behavior, such as the release of prisoners, a ceasefire or the start of negotiations, is a clear indicator of success. The sanctions against the former apartheid regime in South Africa are considered an outstanding example.

However, Clara Portela from the European Union Institute for Security Studies emphasizes: “The idea that one imposes sanctions on a target in order to bring about a change in behavior is not always true. Behavior is also not true.” 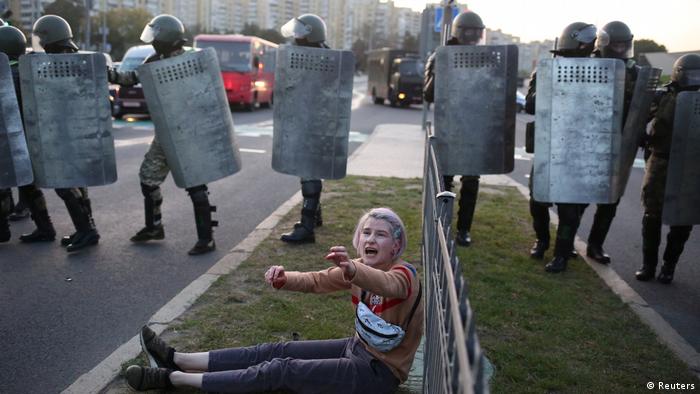 After protests last summer, Lukashenko’s regime brought calm into the country with an iron fist

In the case of Belarus, for example, Europeans and Americans are not openly calling for regime change. But isn’t that exactly what the Western allies are trying to achieve? “Before we can judge whether sanctions are effective or not, it must first be clarified: What is expected of them? What are the goals of the sanctions? And here the information we get from the senders is minimal, if not nonexistent, ”said Portela.

For Christian von Soest from the GIGA Institute it is undisputed “that sanctions are an important signal for international standards”. In the specific case of Belarus, they stigmatize Lukashenko as a culprit and act as a warning to other autocrats. They also send a signal of support to the downtrodden opposition. And they affirm international norms such as the protection of human rights. “In reality, international standards are only upheld through commitment by states,” said Portela.

Katrin Kamin from the Kiel Institute for the World Economy also emphasizes that the effects of sanctions are “difficult to fully assess and monitor” – and accordingly difficult to measure. “But the question is, what would be the alternatives to sanctions and how effective would they be? Given that, ‘success rates’ in excess of 30% seem quite effective,” she said. 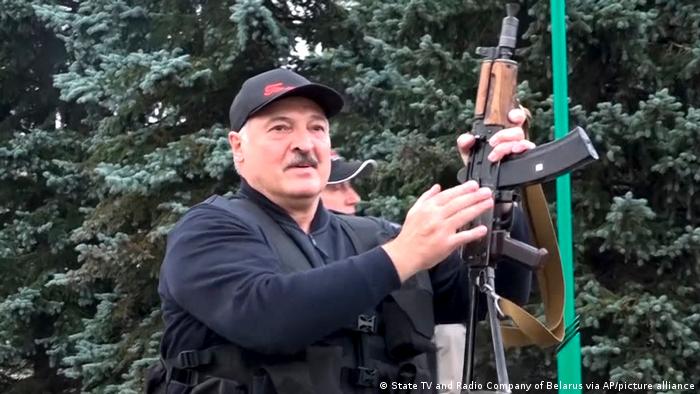 Sanctions can be effective against autocracies

In the case of Belarus, the release of political prisoners would be an important first step. Using the Global Sanctions Database, DW has analyzed which forms of government have been more resistant to sanctions over the past 70 years.

It turned out that sanctions against moderate autocracies were indeed effective. According to the data, half of these sanctions were successful, with only 16% failing. That of the University of Würzburg Democracy matrix regards countries like Russia or Turkey as moderate autocracy, while Belarus is on the way to becoming a hard autocracy.

For tough autocracies, the risk of failure rose to 29%, while the success rate – a global average of 40% for other forms of government – fell to 26%. “We see this effect in Iran and North Korea, for example,” said Kamin. “Pressure doesn’t always lead to democratization.” 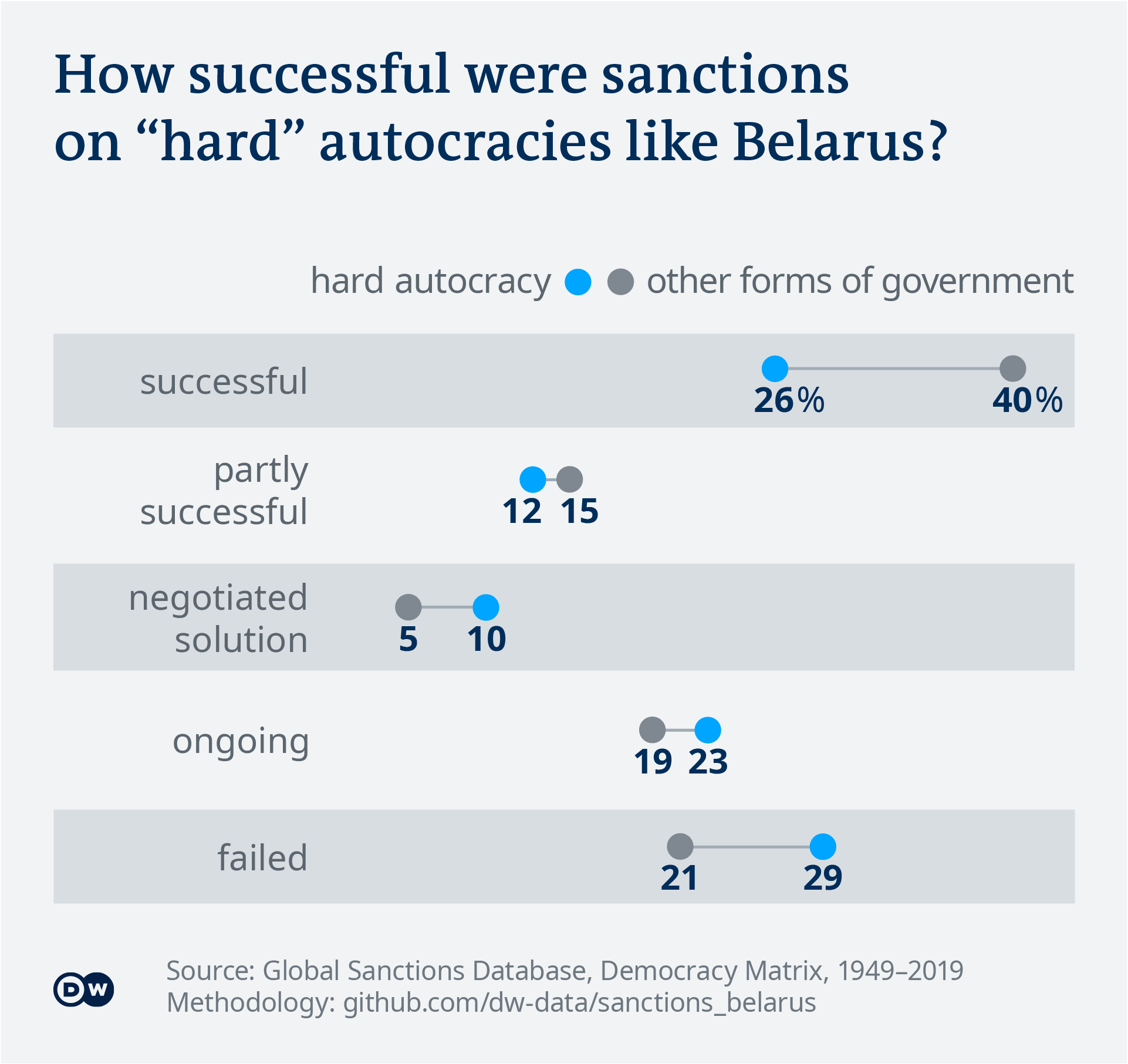 Blockade must show unity in order to function

All of the sanction experts surveyed emphasize that unity is a decisive success factor. The more large nations or confederations of states support the restrictive measures, the more difficult it is for the sanctioned countries to mitigate the consequences of restricting their room for maneuver. However, if even one country breaks the blockade, that will be enough to ease the pressure of the sanctions.

Alexander Lukashenko has a strong ally and supporter in Russia. “The Russian president is perhaps the only one who guarantees his personal safety,” said Olga Dryndova from the Research Center for Eastern European Studies at the University of Bremen. In order to save his regime, Lukashenko put himself into “total dependence”, she says.

As a result, it will probably not be European and American sanctions that will decide Lukashenko’s fate, but rather the political calculations of Russian President Vladimir Putin. 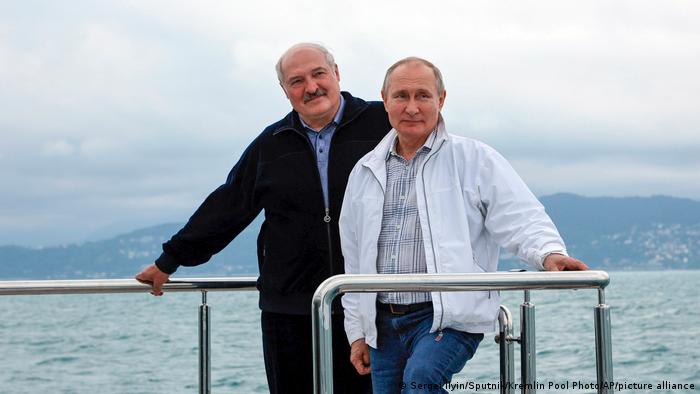 Putin (right) met with Lukashenko in Sochi on May 29, just days after the Ryanair plane made an emergency landing